Press Release
For Immediate Release:
July 21, 2021
Contact Info:
Margaret Mulkerrin 202-225-3130
WASHINGTON, DC – House Majority Leader Steny H. Hoyer (MD-05) spoke on the House Floor today in strong support of the PFAS Action Act, legislation to protect American families from harmful PFAS chemicals. Below are his remarks as prepared for delivery and a link to the video: 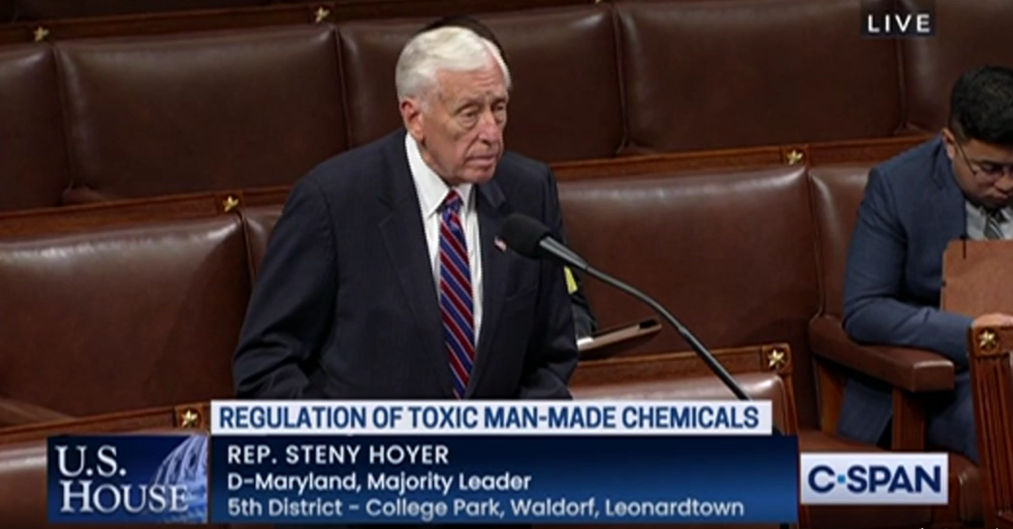 “Madam Speaker, I rise in strong support of this bill, and I thank my friend from Michigan, Rep. [Debbie] Dingell, for offering it. I also want to recognize the hard work by Chairman Pallone and the Members and staff of the Energy and Commerce Committee.

“The legislation before us, which passed through Committee with bipartisan support, is a product of the serious concern for Americans’ health that so many of our Members have been raising over the past few years. Every single Congressional district in our country needs this bill. That’s because every district has faced the challenge of PFAS contamination, which has affected nearly 2,800 communities, according to analysis by the Environmental Working Group.

“Like countless other districts in the country, in Maryland’s Fifth District, which I represent, PFAS contamination has been detected at military installations.  Residents who live in communities adjacent to the Pax River Naval Air Station and the Naval Research Laboratory’s Chesapeake Bay Detachment are rightly concerned about what this contamination may have done to the water they and their children drink or use to bathe.

“Thankfully, the Defense Authorization that we enacted in 2019 required our military to transition away from the use of PFAS chemicals in firefighting foam, a major source of contamination. However, the PFAS pollution that has already occurred needs to be cleaned up, and this legislation would set requirements and deadlines for the EPA to do so. We must prevent PFAS chemicals from entering drinking water used by our communities.

“PFAS have been called ‘forever chemicals,’ because they can linger in the human body for a whole lifetime, causing health effects ranging from cancers to reproductive and immune-system deficiencies.  For four years, the previous Administration claimed that it would take action through the EPA to protect Americans from PFAS contamination. It did not do so.  They failed to protect the American people from these harmful chemicals. Now, it is time for Congress to act, just as this House did last year with bipartisan support, to ensure that the EPA finally takes measures to prevent future release of PFAS chemicals into our environment and clean them up where such contamination has occurred.

“I urge my colleagues to join me – not just because this is so important to the people living in Maryland’s Fifth District, but because it is critical to Americans living in each and every one of our districts. And I encourage the Senate to join us in taking this step to protect Americans’ access to drinking water that is free from toxic, dangerous PFAS chemicals. Vote ‘yes.’”